Plans by the government to introduce a ‘medicines tax’ have been condemned by John Healey. 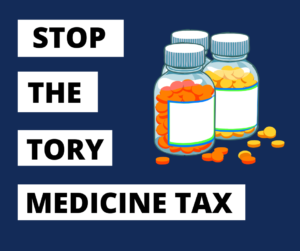 Currently, prescriptions are free for people aged over 60 in England, but the Department for Health and Social Care set up a consultation last year on the idea to scrap free NHS prescriptions in England for those aged between 60 and 65.

The consultation ended last September, and the government had promised to respond by December – however there’s been no response as yet from Health Secretary Sajid Javid.

John said: “People have worked hard and paid into a system all their lives and rightly expect to receive free prescriptions when they reach 60.

“The government is planning to pull the rug from under pensioners feet and start charging for prescriptions at a time when they’re already feeling the burden of rising energy costs and shopping bills.

“The new medicine tax could lead to some people not taking medicines they are prescribed or even taking lower doses in an attempt to make medicines last longer.

“This could then have a knock-on effect of increased hospital admissions including A&E visits and GP appointments causing additional costs and adding extra strain to the NHS and social care services.

Prescriptions are free for all patients living in Scotland, Wales and Northern Ireland. In England, the cost of a single prescription has risen by 30% since 2010 to £9.35.

Nationally an estimated 2.4 million people over 60 would lose out on the right to free prescriptions.

Changes to prescriptions charges are expected to be made by the government in April.

Save free prescriptions for 60-65 year olds

The Department for Health and Social Care set up a consultation last year on the idea to scrap free NHS prescriptions in England for those aged between 60 and 65. Let the government know this isn't acceptable by signing the petition below.
2022-05-13T09:57:54+01:0015th March 2022|