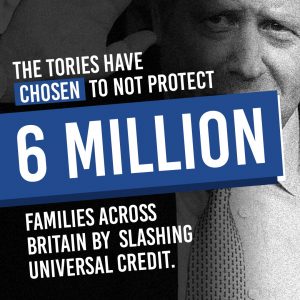 THOUSANDS of Dearne families still face uncertainty over Boris Johnson’s plan to cut Universal Credit by over £1,000 a year.

Conservative MPs refused to vote with Labour after they forced a crunch vote in the House of Commons this week to scrap the cut.

MP John Healey has said the move will hit nearly 11,000 families in Wentworth & Dearne with a cut equivalent to the cost of an average family’s annual electricity, gas and internet bills combined.

Mr Healey has obtained new figures from the House of Commons Library showing the number of people claiming Universal Credit has doubled in Rotherham due to the pandemic while Barnsley has seen a 76 per cent increase.

A third of them are working and the proportion of people claiming the benefit to top up low wages went up last year.

“In Rotherham and Barnsley, there are almost 25,000 more people claiming Universal Credit than before the pandemic.

“More than 10,000 of them are working but need Universal Credit to top up low wages.

“The government has wasted £22bn of taxpayers’ money on a testing system that doesn’t work and spent billions on contracts to Tory donors. Low-income families should not pay the price.

“It’s unthinkable that in the grip of the pandemic and an economic crisis the government would look to cut the income of Britain’s poorest families.”

Families have reported facing extra costs because of the pandemic, spending more on food, utility bills and home-schooling materials.

The Joseph Rowntree Foundation has warned that the cut could see another 300,000 children pushed into poverty.