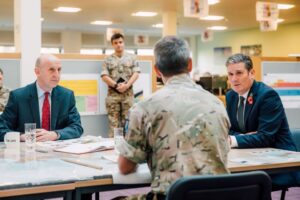 Troops who took part in the Afghanistan evacuation should get medals, local MP and Shadow Defence Secretary John Healey has said.

More than 1,000 UK service personnel took part in Operation Pitting, which airlifted 15,000 people fleeing oppression and persecution as the country fell to the Taliban.

The mission was the largest of its kind since the Second World War and John has called on the Government to formally recognise the armed forces’ exceptional efforts and professionalism.

Under existing criteria, troops would not receive medals as the mission did not meet the 30-days continuous service for which they are awarded.

John said: “Our armed forces played a life-saving role in the evacuation of Afghanistan, risking their lives to airlift 15,000 people in just 14 days.

“Stuffy conventionalism should not stop us from recognising their bravery. This was a crisis mission, in a conflict zone. It was dangerous, difficult and successful.

“Even though it was shorter than the arbitrary 30-day medal threshold, the troops on Operation Pitting absolutely deserve a medal. Ministers should commemorate their role and honour them.”

Labour has said that the criteria for medallic recognition needs to shift to reflect the changing nature of conflicts that our armed forces are involved in.