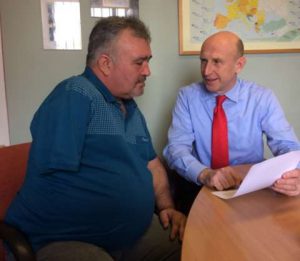 John has called for a meeting with the head of the NHS over its refusal to fund a prosthetic arm.

The MP has been fighting on behalf of Adrian Barrass, of Swinton, South Yorkshire for two years.

Dad-of-three Mr Barrass, 51, had his right arm amputated to the shoulder after a car crash in 2004. His left arm was also damaged and he suffered brain damage.

The Wentworth and Dearne MP is involved in a race against time to persuade the NHS to fund the prosthesis, before Mr Barrass’s existing arm deteriorates so much that it becomes unusable.

Mr Healey has uncovered a dramatic fall in funding for specialised treatment, from 256 approvals in 2013/14 to just 29 from April-November 2016/17. That means just one in six applications now get the green light, compared to three years ago.

It is money from this pot of cash that Mr Barrass’s clinicians have repeatedly applied for, and been knocked back.

The MP said: “I’m angry and frustrated that 13 years after his devastating accident – and two years of my involvement and investigation – Mr Barrass is still no further forward.

“He just wants the medical help he needs to help him live a life with dignity.

“Judging by the sharp fall in funding, Mr Barrass isn’t the only one being left without help.

“If the NHS criteria has been tightened to cut approvals and save money, it’s disgraceful.”

Mr Barrass said: “A prosthetic arm would make a massive difference to my life, both physically and mentally.

“It would give me back some of my independence and dignity. I don’t want to be a burden on people. I have always been a proud man.

“It would be the little things that would mean the most, like being able to put both my arms around my children.

“I’m scared that soon I won’t have my other arm either.”

Mr Healey has asked for a meeting with NHS chief executive Simon Stevens to discuss the case and funding drop-off in more detail.