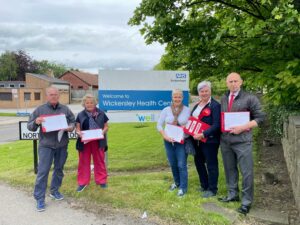 Clifton Medical Centre’s branch at Wickersley Health Centre will now stay open after GPs listened to local patients and residents in the area.

The news comes after John Healey and local Labour councillors in Wickersley launched a petition urging doctors to think again following a consultation on the surgery’s future.

The campaign was launched following a number of patients contacting John with concerns about having to travel into Rotherham to see their GP.

John said: “This is great news for patients in Wickersley and the surrounding area who came forward and were willing to speak out in support of our campaign.

“It’s good to see that GPs genuinely listened to residents’ concerns put forward in the consultation. It clearly caused deep concerns for many people who were worried about getting to see their local doctor at a time when there are already difficulties accessing GP services.

“I’d like to thank all of those that strengthened our case by signing our petition and helping to keep the local Wickersley surgery open.”

The consultation was opened by Clifton Medical Centre in April as they were reviewing the future of their branch at Wickersley Health Centre.

Over 340 people backed Labour’s petition calling for the branch to be kept open.