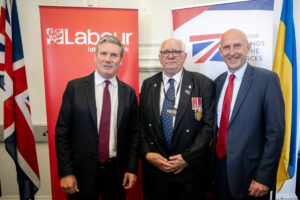 The event was attended by other Labour MPs and members from the Armed Forces communities from across the country to celebrate their contribution at home and abroad.

John Healey said: “I was delighted to have invited Ron to Parliament to celebrate Armed Forces Day with Labour Leader Keir Starmer.

“Labour backs and thanks our Armed Forces. I am deeply proud of our servicemen and women – and theirs is the ultimate public service.

The Shadow Defence Secretary also stressed that the Conservatives have left our Armed Forces with weakened foundations. The Army has been cut to its smallest size in 300 years and Ministers must halt army cuts now. Labour would also strengthen support for veterans – and boost veterans mental health support by £35M.

Armed Forces Day is held each year on the last Saturday of June to celebrate the service and sacrifice of our UK Armed Forces, veterans, and their families.