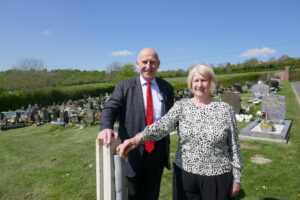 John Healey has helped secure a new water tap for Greasbrough Lane Cemetery in Rawmarsh after visitors contacted him about the long walk to get water for their loved one’s graves.

Residents in Rawmarsh told John that many elderly people were having to carry water over long distances in all temperatures and weather conditions.

Joan said: “I’d like to thank John for his work in getting the new tap installed. The taps that were originally installed at the cemetery were positioned unfairly and it meant those of us visiting graves at the top of the cemetery had to walk around twice the distance of others to get water.

“I felt that we had all paid the same amount of money for a grave, yet we had not all been given the same access to water.”

John contacted Dignity who runs the site and asked for them to review the position of the taps.

Following a review, they agreed to install a new water tap at the top of the cemetery for visitors.

John said: “I’m so glad that Dignity has now installed the much needed tap for Joan and other people that use the cemetery on a regular basis so they no longer have to walk long distances to get water on site.

“Visitors go in all weathers to the cemetery, as a particular day may be a birthday or an anniversary that is special to their loved one, so whether it is very hot or very cold, people will still do what they need to do as part of the grieving process.

“Joan has shown great determination and resolve to sort out the problem with me and made a real difference for the local community.”