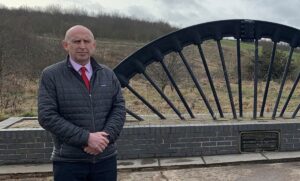 John Healey has accused the Prime Minister of breaking an election promise to miners.

He has written to Boris Johnson in a last-ditch attempt to get him to stick to a pledge made in November 2019 during the General Election campaign.

He is reported to have made a ‘categorical’ pledge that miners would get their ‘fair share’ from the Mineworkers Pension Scheme (MPS).

Mr Healey has been campaigning for years for changes to the MPS and its controversial ‘surplus-sharing arrangement’ which means any surplus is shared 50:50 between the government and members.

When asked about the £4 billion the government has taken from the scheme, the Prime Minister said: “We will make sure that all their [miners] cash is fully protected and returned, I have looked into it and we will ensure that’s done.”

Mr Healey told the Prime Minister in his letter: “Many miners took your comments to mean there would be changes to the surplus sharing arrangement.

“If the government has no plans to change the scheme then you will have broken this firm promise you gave to miners and their families.

“It is time for the government to do what is right and take a reduced share of the surplus to allow more pension support for the mineworkers and their families.”

Last year Mr Healey discovered that South Yorkshire has the highest number of members of the MPS in the UK. One in five members – more than 27,000 – live in and around South Yorkshire, and 6,710 in and around the Wentworth & Dearne constituency alone – more than in the whole of the North West region or in the four southernmost English regions combined.

He and other Labour MPs want more money to go to the miners, who take an average pension of just £84 a week.

He wrote twice to the Energy Minister, Kwasi Kwarteng, in Autumn last year, calling again for a review of the scheme and seeking clarification on the Prime Minister’s pledge.

Mr Kwarteng said he believed the Prime Minister was referring to the government’s commitment to ensure all members “receive their full entitlement” and went on to list features of the scheme that were in place in 2019 before the General Election.