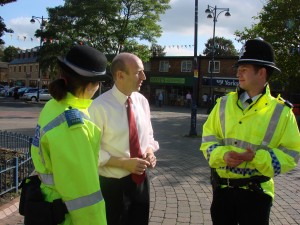 The Government has said it wants to restore the 20,000 police officers it cut from 2010 onwards.

Over the last decade, South Yorkshire Police has lost 500 officers.

South Yorkshire’s Police and Crime Commissioner (PCC) Alan Billings has said we need more, and he will fund a further 79 officers from local resources.

Instead of funding the police properly, Ministers are putting the burden on local council taxpayers to plug the gap – and our area is losing out.

I speak regularly to borough commanders and I’ve been pressing for more officers on the beat in neighbourhoods, both with them and South Yorkshire’s chief constable, as well as a new police station serving the north part of Rotherham, in Wath or Swinton.

By 2010 police officer numbers reached record levels, up by almost 17,000 since 1997 – when the last Labour Government came in. Alongside the extra police officers, Labour introduced more than 16,000 Police Community Support Officers (PCSOs).

Around that time, our PCC decided that cuts were putting public safety at risk and must stop. He began using local resources to increase officer numbers.

Recently there has been a welcome rise in police officer numbers nationally but the total is still over 9,000 less than in 2010.

The police workforce has 23,824 less personnel, including:

The Government has said nothing about replacing the police staff or PCSOs lost in the last decade. This means newly recruited officers will end up behind desks, instead of being on the streets.

Rather than properly fund the police, Ministers have chosen to put the bill onto hard-pressed local taxpayers.

Last year the Government provided £700 million for 6,000 additional officers; this year the funding is only £415 million to cover the same number of new recruits, and PCCs have been told they must raise the council tax precept. The precept is the money paid through council tax that contributes to the police budget.

The Government is assuming that council tax precepts will increase by 7 per cent or £15 a year for a Band D property.

South Yorkshire Police will also have to make substantial savings and use reserves, after a decade during which the force has faced a real-terms cut of £55 million – 20 per cent of its funding – between 2010-11 and 2020-21.

There should be no winners and losers when it comes to public safety. Government funding for police should be fair for all.

Crime is going up

By 2019-20, violence as a proportion of all crime recorded by the police had reached its highest level since comparative records began.

Violence against the person has increased in every police force in the country.

Only one in 14 crimes lead to a charge.

The last decade of cuts have put public safety at risk, allowed criminal gangs to get established and contributed to a growth in serious crime.