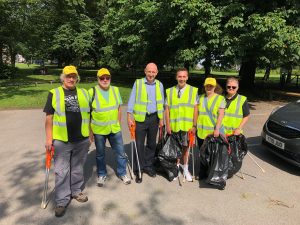 MP John Healey is planning a series of litter picks and asking residents to nominate a ‘grot spot’.

The MP said: “Sadly, most people will be able to think of an area near them that’s regularly used as a dumping ground.

“This litter spoils our environment and harms wildlife.

“We have some fantastic local groups who go out clearing up litter every week, because they love where they live and want to make it better. I’ve been out with them and have been so impressed by volunteers going out week after week even though it’s sometimes disheartening to see more rubbish dropped just days afterwards.

“But people are more likely to litter where rubbish has already been dumped – so everything we can do makes a difference.

“I hope this will give our volunteer groups a bit of a boost and help turn blighted pieces of land into beauty spots.”

Last year more than half a million people collected more than 900,000 bags of rubbish as part of the Great British Spring Clean campaign.

Mr Healey is inviting people living in the Wentworth & Dearne constituency to put forward an area they’d like to be cleaned up, by sending photos to john.healey.mp@parliament.uk or dropping them into the MP’s office at 79 High Street, Wath-upon-Dearne, S63 7QB.

The MP will then choose at least three of the worst areas to be blitzed. Entries should be in by Sunday 8th March.