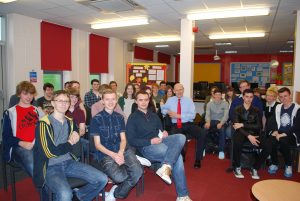 MORE than half of secondary students in years critical to exams have had to miss school due to self-isolation, an MP has found.

Research carried out by John Healey with schools in his Wentworth & Dearne constituency found that between 55 and 70 per cent of pupils in years 10 to 13 had had to take time off.

Now the MP has called on the Education Secretary to give schools and students better information and to do more to make sure next summer’s exams are conducted fairly.

In one school, three quarters of year 11s had missed time in school, just two months after returning in September.

In one year 10 cohort, 96 per cent of students had missed school time and in another 77 per cent had been absent because they were self-isolating.

Hundreds of pupils in the constituency are without laptops or a home internet connection so they can’t learn remotely if they need to self-isolate.

The schools also reported to the MP that they had seen an increase in mental health problems among students and staff.

In a letter to the Education Secretary, Gavin Williamson, Mr Healey said: “Students will try their best in the most challenging of circumstances, but it is inevitable that those who have lost the most learning will suffer the greatest disadvantage when they take exams next summer.

“The government has been too slow to get to grips with this, and the measures announced do not go far enough.”

Pointing out that, in 2020, pupils in private schools saw a sharper rise in grades, he added: “The government must ensure the distribution of grades is spread evenly across schools and postcodes to ensure all students are treated fairly and the most disadvantaged pupils do not lose out.”

He also urged Mr Williamson to consider the impact of the pandemic on the current years 10 and 12, due to sit GCSEs and A-levels in 2022.

Elaine Renavent, headteacher at Wickersley School, has also written to the Education Secretary on the subject, pointing out that in the first eight weeks of term, 241 out of 337 year 11 students had missed time at school because they were self-isolating.

Her letter said: “We are only eight weeks into this school year, and we all recognise that there is a long way to go before we return to any kind of normality. Students facing exams this summer are becoming increasingly anxious, and the uncertainty around what the next seven months will being is adding to an already spiralling mental health crisis in our young people.”