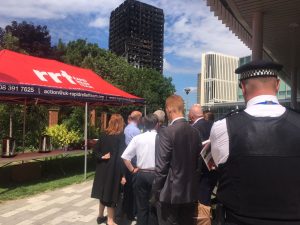 In the week of the two-year anniversary of the Grenfell Tower fire, Labour’s Shadow Housing Secretary, John Healey MP is urging the Government to set a new ultimatum for private block-owners with Grenfell-style cladding to replace it within six months or face take-over of their blocks by councils to get the work done.

Two years after the Grenfell Tower fire, more than nine in ten private blocks confirmed with Grenfell-style aluminium composite material (ACM) cladding – 164 out of 175 – have still not had it removed and replaced. At this rate, it could take 30 years for all private blocks to have dangerous cladding fully replaced.

Most worryingly, Government data show that almost half – 70 – of these private sector residential blocks don’t even have a plan in place to remediate flammable cladding. The Government refuses to name tower blocks identified with ACM cladding, so an estimated 60,00 residents may not know their home is unsafe.

Labour is today setting out a five-point plan to force the pace of re-cladding on private tower blocks:

“Many private tower block owners have shown zero sign of replacing their Grenfell-style cladding, and Government Ministers are letting them drag their feet.

“Two years on from the Grenfell Tower fire, concerned residents are still living in homes that may not be safe and many are having to pay for interim safety measures such as 24-hour fire wardens.

“Enough is enough. Private block owners should be made to replace this dangerous cladding, or face councils taking over ownership of these buildings to get this vital safety work done.”