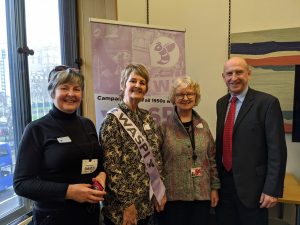 John Healey MP attended an event in the House of Commons organised by the Women Against State Pension Injustice (WASPI) campaign.

Anne Keen, co-founder of the WASPI campaign, said: “We were delighted to see Mr Healey at our event. He clearly understands the plight of women born in the 1950s who were denied several years of the State Pensions they paid into all their working lives.

“We couldn’t have wished for a better response to our invitations to MPs to attend the Drop-in session. It was quite overwhelming. The support for our campaign for justice was evident. We hope that Parliament will now address the issue as a matter of urgency. Many 1950s women are suffering.”

John recently wrote to the Secretary of State for Work and Pensions calling for Government support for women born in the 1950s. He shared the personal stories of women from Bramley, Sunnyside, Swinton, Rawmarsh, Wath, Brampton and Bolton-on-Dearne.