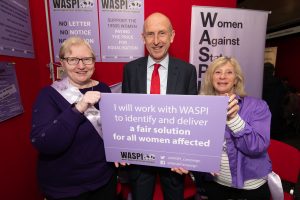 The personal stories of Rotherham and Barnsley women hit by a rise in their pension age are set to reach the desk of a top Government Minister.

MP John Healey has written to the Secretary of State for Work and Pensions, Thérèse Coffey, calling for Government support for women born in the 1950s.

There are thought to be 3.8m women affected, including 6,100 in the Wentworth & Dearne constituency.

The impact is clear in the number of women in the constituency aged 60 or over and forced to claim out-of-work benefits, which has nearly tripled in the last few years, from 219 in 2013 to 587 in 2019.

John said in the letter: “Women were not given sufficient notice, with no time to make alternative plans to see them through.

“Many simply did not have the money to enable them to make other arrangements and are suffering huge financial difficulties.”

His letter to Ms Coffey included the experiences of women who have contacted him, from Bramley, Sunnyside, Swinton, Rawmarsh, Wath, Brampton and Bolton-on-Dearne.