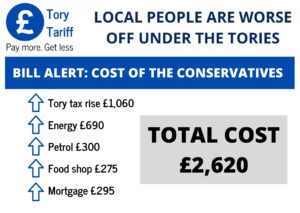 John Healey says people feel ‘abandoned’ by the Government and left to fend for themselves in the cost of living crisis.

Residents are talking to him about their struggle with record tax levels, energy costs, petrol prices and food bills.

“Many people are working hard but finding it harder to make ends meet. With costs rising across the board, they feel they’re paying more and getting less”, the MPs says.

A local NHS worker told John how much more they are paying and how they are juggling family finances.

The nurse says: “In my pay packet this month, I am paying £35 extra in National Insurance contributions. I am paying £101 a month extra for my energy costs. Paying more for petrol to get to work – £10 extra per month. Paying more for food and household goods – £18.50 extra per month.” The nurse goes on to say that their plans to retire may not now be possible due to the cost of living crisis.

A number of pensioners have also been in touch with John with one couple telling their MP: “With the present fuel, heating and food increases we will probably have to choose between Heating and Eating.”

While out in the community other pensioners have explained to John how their pensions are fixed but the bills keep going up, with many saying they just don’t know how they’ll cope with the rising costs.

John Healey said: “People feel abandoned by Government at a time when they need help with spiralling costs coming at them from all quarters.

“They see Tory Ministers who are out of touch and making the problems worse by hitting people with a tax hike in their pay packets this week. The Chancellor has now raised taxes 15 times, costing families £1,060 this year. These tax rises combined with energy cost, petrol, food shop and mortgage rises are costing families on average a total £2,620 this year.

“I’m really disappointed the Government has rejected Labour’s plan for practical, fully-costed steps that could help everyone.