John Healey hits out at delays to football reform 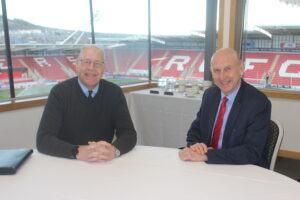 John Healey has slammed the Government for delaying much needed football governance reform.

The Government has now confirmed that it supports the creation of an independent regulator for English football, strengthened owners and directors tests, greater fan involvement in the running of their clubs, and a review of women’s football.

John has been working with Rotherham United who are backing the changes and he recently wrote to the Culture Secretary calling for the reforms to be included in the Queen’s speech in May.

John said: “This is positive news, but there is no denying the announcement will be a massive disappointment to fans across the country. Rather than putting forward new legislation to be announced in the upcoming Queen’s Speech, the Government said they will publish a consultation this summer, adding further unnecessary delay. At this rate, we will not see any new legislation until 2024 at the earliest.

“Football governance in England is broken and in urgent need of the changes recommended in the fan-led review.

“But it seems the Government is betraying fans, lower league clubs and the communities football is built around by dealing these much needed changes.

“Football clubs are at the heart of communities. They’re much more than businesses, but great sources of identity and pride in our towns. Too often, fans are locked out of discussions, and deals which affect the whole community are done entirely behind closed doors.

“We need to re-balance the relationship between fans and clubs, and between the biggest names in the Premier League and the smaller clubs lower down the leagues, by urgently bringing in new laws to stop any more clubs going bust or being used as a play-thing for the wealthy.

“11 years after the Select Committee recommended greater regulation, three years after the collapse of Bury, a year after the disastrous European Super League proposal and five months after the fan-led review report, we do not need further consultation or a ‘roadmap’. We urgently need an independent regulator of football in legislation, and greater fan involvement in the game.

“The delay in implementing the Fan-Led review will only lead to more clubs facing difficulty, more turmoil for fans, to the benefit only of a select few rich owners who continue to benefit from the current system.”