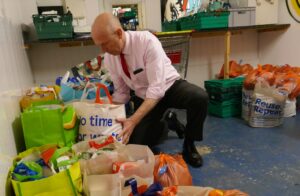 John Healey says latest figures showing food bank usage has risen by 42% across Rotherham in the last year shows the real impact of the cost of living crisis.

While helping out with deliveries at Montgomery Hall Food Bank in Wath, John said the true impact of rising costs and household bills was “clear to see”.

That’s an extra 1,137 people collecting food parcels in Rotherham over the past 12 months.

John said: “Britain shouldn’t be a country where millions of people are struggling to get by on a day to day basis.

“These figures are devastating and reveal the level of hunger for children and families because of the cost of living crisis.

“Decisions made in Downing Street, such as cuts to Universal Credit, lack of help to deal with rocketing energy bills, punishing tax rises and real terms pensions cuts are pushing more and more working people and pensioners into food bank queues.”

Other local food banks are telling the same story including Montgomery Hall, where John has volunteered through the COVID-19 pandemic. Organisers there also say numbers have gone through the roof.

Lynn Cadman, who runs the Food Bank, says: “The Wath Food Bank has seen an increase in the number of people coming to us for support, however, donations are falling, which is making it difficult to put our food parcels together.

“People are having to cut back their own budgets due to the rise in cost of living and, unfortunately, that means they don’t have the spare income they used to have to be able to donate items.”

Latest information from The Food Foundation has also shown a rapid 57% jump nationally in the proportion of households cutting back on food or missing meals altogether in just three months.

In April, 7.3 million adults live in households that said they had gone without food or could not physically get it in the past month, which include 2.6 million children. This is compared with 4.7 million adults in January.

John added: “It’s clear the Government’s lack of help is causing hardship across Rotherham and the rest of the country.

“The food budget is often the first thing to be cut when money’s tight. People rightly expect the Government to do more, and they need help now with the spiralling cost of basics. Instead, the Tories are standing back while people struggle to make ends meet. Labour has a fully costed, practical plan that could help everyone.”