John Healey MP calls for crack down on community crime

John Healey is calling for a crack-down on anti-social behaviour which the MP says is making more and more people’s lives a misery. His call for action comes as new analysis from the Labour Party shows a staggering 1.2 million incidents of nuisance are recorded in England and Wales every year – equating to over 20,000 incidents every single week.

While recorded crime in South Yorkshire has risen by over 41,000 cases since 2015, nationally the percentage of people who say they never see a police officer has almost doubled over the decade since the Conservatives came to power from 25% in 2010 to 48% 2020. 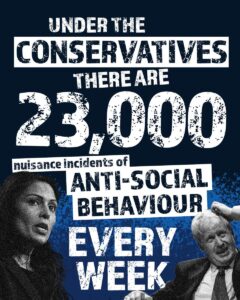 John has said: “It’s clear to see that local communities are being let down by the Conservatives.

“Persistent anti-social behaviour is a nightmare for residents and there hasn’t been a national plan to help deal with it for over a decade.

“Changes are needed to help make people feel safer in their homes and in their communities and that’s why we want to see new police hubs set up to bring neighbourhood prevention teams back out into our communities.”

Some 1.2 million nuisance incidents were recorded in the year ending September 2021, equating to 23,759 incidents every week, and over 3,300 every single day. When expanded to cover personal and environmental ASB such as drug paraphernalia, over 1.6 million incidents of antisocial behaviour were recorded over the last year – over 200,000 higher than pre-pandemic levels.

• New Police Hubs in crime and antisocial behaviour hotspots across the country to get the police back out into the community
• Neighbourhood Prevention Teams bringing together police and local councils and youth services to tackle antisocial behaviour that is blighting communities
• Stronger powers for police and local councils to shut down drug dens, and to keep them closed for longer
• A major recruitment drive to increase the number of special constables
• Giving victims of persistent antisocial behaviour the same entitlements including access to support services as other victims of crime

You can read more on Labour’s plans to support victims and tackle anti-social behaviour here.