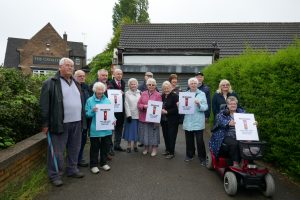 Local MP John Healey is dismayed at the isolation facing residents in Ravenfield.

A large number of people from the village have been in touch with the MP’s office following the closure of the post office, lack of cash machine facilities and poor bus services in the area.

The latest problem to hit residents is that for the last six months they have been without access to a post box in the heart of the village.

In a letter to Royal Mail CEO, Moya Greene, John says: “I am appalled by Royal Mail’s broken promises and failure to complete the most basic task of moving a post box in the centre of Ravenfield village.”

“Ravenfield residents feel let down and abandoned. Royal Mail seems more concerned by falling share prices than the country’s bread and butter postal service which has been its purpose for 500 years.”

“If this latest promise and timescale is finally met, it will be 25 weeks since the post box was first reported to be blocked on 4 January – six months! This is totally unacceptable”

“…a large number of residents of Ravenfield feel increasingly isolated because of the post office closure, poor bus services and lack of access to a cash machine. Many are elderly and the postal service is especially important to them.”

At the beginning of the year Royal Mail claimed the post box would be back in operation in 12-16 weeks.