Stealth move by Government could put post offices at risk 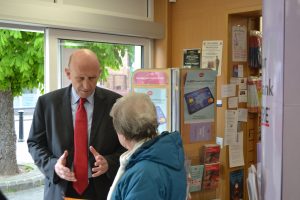 MP John Healey has criticised a Government move that he warned could put post offices at risk.

Local pensioners who have their pension paid into a Post Office Card Account (POCA) are receiving a letter out of the blue from the Department for Work and Pensions which asks them to switch to a bank account.

The letter states: “We would like to change how we pay you… We are now asking that you use a bank, building society or credit union account.”

Switching is not compulsory, but the letter does not say so.

Just three years ago the Coalition Government renewed the card account contract with the Post Office until 2021, a move the Minister for Pensions boasted would “help safeguard the future of the Post Office network.”

Mr Healey is concerned the Conservative Government is now moving pension payments by stealth to banks, to save money. And this could threaten the viability of post offices.

He said: “POCA holders make 11 million visits to post office branches every month. Taking away this business is bound to put our post offices at risk.

“The Government wants to save money, but they’re not thinking about our vital post office network or the pensioners who are happy using their POCA, and who have been really worried by the letter. Ministers have made no statement on this to Parliament yet they’re putting local post offices at risk.

“In many villages – including Goldthorpe, Thurnscoe, Bolton-on-Dearne, Swinton and Wath – the banks have backed out and the local post office is the only place left for people to get their money. Their nearest bank could be miles away.”

Dave Lowman, from Goldthorpe, said his wife received one of the DWP letters. He said: “It’s frightening for a lot of older people. It makes them think they have to change to a bank.

“We’ve only got a post office now in our village, there’s no bank. If that went, I don’t know what we’d do.”

The POCA is often used by people who cannot get a bank account because it can be opened without a credit check.

Answers to Parliamentary Questions show that the Government has issued 900,000 letters and 440,000 people have switched payments to a bank account.

Mr Healey has written to the Secretary of State for Work and Pensions demanding he stops the letters and explains why he’s pushing this stealth-switch of business from post offices to banks.