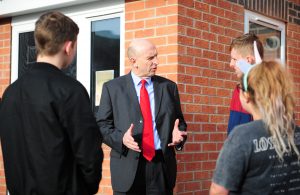 YOUNG people in Rotherham at risk of homelessness now have access to accommodation and support with the opening of a new project.

The 12, two-bedroom flats will be home to 55 young people who will share a kitchen and living area.

John said: “This project has transformed the old Rawmarsh library and housing office. It’s now a modern, purpose-designed place that aims to transform the lives of young people who’ve nowhere else to go.

“It’s clear from conversations I’ve had with the new residents that it’s a safe space with great support from staff, as they look to start work, training and living on their own.

“I know some local residents were worried about the project at first but now the neighbours are giving it great support, and a number were with us to mark the official opening.”

Action CEO, Claire McGonigle, said: “This was a brave and ambitious project for Action, and it was amazing to see how everyone has come together to create a really great living space that can support the brilliant young people that are the reason why we’re here.

“We know that this fantastic staff team and building will be able to support the young people of Rotherham for years to come.

“It was fantastic that John Healey MP and Dr Alan Billings spent so much time listening and understanding the situations that our young people are in.”

The project is an expansion of Action’s young people’s services, with the new build located just behind their existing site, which opened to its first six residents in September 2016.

The aim is to allow young people to live independently while having round-the-clock support on site and access to training and work that will help them to build a future.

The project was funded through the ‘Platform for Life’ programme, a Government scheme that aims to help young people at risk of homelessness. The grant paid for the conversion of the former library and housing office into accommodation, office space and training facilities.