Summer plans “stuck in the system” due to passport backlogs 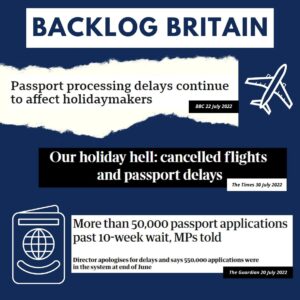 Families across Rotherham and Barnsley are being let down by the government when it comes to dealing with the backlog of hundreds of thousands of passport applications.

John Healey says he’s been dealing with around 30 passport problems each month since mid- April, with many people feeling anxious, distressed and upset at having to wait weeks and months for the situation to be resolved.

Some of those contacting John faced having to re-book their holiday often costing thousands of pounds. Others received passports but were left waiting for others to arrive despite applying for family members at the same time, only to find that they had been processed at different locations around the country and were stuck in the system. It’s left some families concerned about not being able to take children and other family members on holidays or attend important events such as weddings and funerals.

John said: “People have been working hard and deserve to be able to take a break without having the stress and worry of waiting to see if their passport will arrive on time or not. For many it’s the first time they’re travelling abroad since the pandemic and others are finding plans to travel to weddings, funerals and work are being hit.

“Local families are getting caught up in backlog Britain and Government ministers just won’t get a grip of the problems. Some applications have been stuck in the system for months and the passport office say they will only make enquiries if they are within two weeks of their travel date. To progress the application people are then asked to upgrade to the fast-track service – which they must pay extra for.

“Ministers set up a dedicated MP helpline to deal with constituents’ passport problems but myself and my team often have to wait on hold for over an hour before getting through.

“Government’s just not working and people are paying the price for the failings of Conservative Ministers. They had two years to prepare for a predictable spike in passport applications once covid travel restrictions were lifted and they’ve totally failed to get hold of the problem.”

The Commons Home Affairs Committee was recently told by HM Passport Office director that more than 550,000 passport applications were stuck waiting to be processed and that it is still taking around 10 weeks to process 10% of applications instead of the standard three weeks.

It was also revealed that the problems were likely to continue until the end of the year.