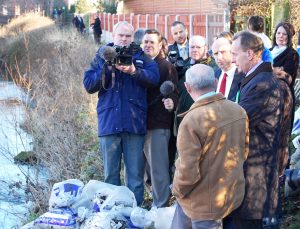 John in Barnsley after the 2007 floods

Flood protection funding from the Government for South Yorkshire is “wholly inadequate”, an MP and former floods minister has told the Prime Minister.

Wentworth & Dearne MP John Healey, who was also appointed floods recovery minister after the 2007 floods, has written to Boris Johnson after his announcement in July that South Yorkshire would get £16m for two schemes in Sheffield.

This is a fraction of the £270m requested by the South Yorkshire Mayor and four local authorities in their detailed Flood Priority Programme, which set out 27 projects to protect 2,800 business and 10,300 homes and save £1.7bn of future damage.

John said in his letter: “There can be no doubt that the £16m announced for two schemes in South Yorkshire is wholly inadequate and will leave people in our area fearing their homes, businesses and schools will be devastated over and over again.

“As well as being short-changed our region has been pushed out of decision-making, with Ministers deciding from Whitehall that the money granted is to be spent in Sheffield.

“The money allocated to South Yorkshire does not measure up to the dangers facing our communities and areas of Rotherham, Barnsley and Doncaster which were devastated by floods last year have been totally overlooked.”

The Flood Priority Programme included two schemes in the Wentworth and Dearne constituency, at Kilnhurst and Parkgate, which are now left in limbo.

John added: “Flooding infrastructure is absolutely vital to support our region’s economic recovery as we emerge from the pandemic. The plan South Yorkshire’s leaders put together would save £1.7bn in avoided damages alone.

“Boris Johnson promised us after the terrible floods of November 2019 that he would do more to help people, and put in more flood defences. He must keep to his word. He must also – as soon as possible – arrange the flooding summit he promised nine months ago to discuss strengthening flood defences across the North of England.”