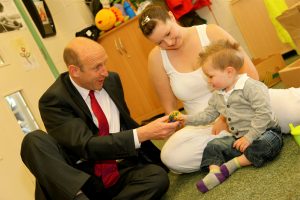 MP John Healey has launched an online survey for childminders that will check the impact of Covid-19 on early years childcare.

He is concerned that childminders are having to close their businesses as a result of the pandemic and that this means problems for parents getting back to work, as the Government has told them to.

Most childminders are self-employed but many have not been able to get support from the Self-Employment Income Support Scheme.

Demand for childcare has gone down because parents are worried about children catching the virus or because they’ve been made redundant, placed on furlough or are working from home.

John said: “The Government is telling people to get back to work and winding up the furlough scheme. But parents can’t work without childcare. They’re in an impossible position.

“It’s even more difficult without the support of grandparents or other relatives that they would usually have.

“I want the Government to look at how it can better support childminders and the childcare they provide in those vital early years.”

When responses are in, John will compile a report and send it to Gavin Williamson, the Secretary of State for Education. He will also follow it up in meeting with the Minister to discuss and use the report to pursue problems in Parliament.

John will also share the report and his findings with the national association for childminders, to help their work. He hopes it will encourage the Government to do more to support childminders and early years providers.

Childcare settings were closed to all but vulnerable and key worker children during lockdown and reopened to under 5s on 1 June.

Nationally, there are almost 40,000 childminders offering just under 300,000 places. More than two thirds earn less than the minimum wage .

In that time, Rotherham lost 63 childcare providers while 37 went from Barnsley.

But with the Covid crisis causing a substantial drop in their income, and months more uncertainty ahead, a quarter of childcare providers fear they may have to close within a year .

In the Wentworth & Dearne constituency, there are 21 Ofsted registered childminders. Rotherham and Barnsley both have 54.

The survey is open until Monday 28 September 2020.