Silverwood Nature Reserve to get protection from off-road vehicles 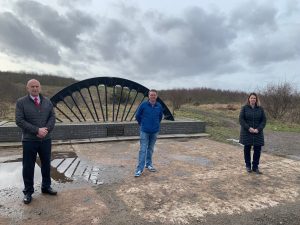 Silverwood Nature Reserve is to be better protected from off-road vehicles after a successful campaign by the area’s MP, councillors and community groups.

The landowner Ogden’s has now agreed to block the gaps in the fence along Hollings Lane.

This comes after meetings between John Healey MP and Ogden’s managing director, who then carried out site visits.

John launched a petition in February and it has since been signed by nearly 700 people.

It is part of work alongside Wickersley North councillors and Silverwood Colliery Heritage Group to urge the landowners to do more to protect the nature reserve.

The former Silverwood Colliery site has become a much-loved green space with trees, a lake and thriving wildlife.

But there have been problems with off-road vehicles causing serious damage and anti-social behaviour.

John said: “Local people have made it clear to us that they really care about Silverwood Nature Reserve, and I am pleased Ogden’s have listened to them about how it is being ruined by off-road vehicles.

“Hundreds of people signing our petition sent a strong message that people value the reserve and that it should be protected.

“I hope the work will be carried out soon so we can get on with improving the reserve and making it into the great community asset it can be.”

Cllr Emma Hoddinott said: “Thank you to all the residents that supported us in raising this issue. It’s really welcome that we will finally see some progress on the site and it will be made more secure for everyone to enjoy.”

Bob Boyle, of Silverwood Nature Reserve Support Group, said: “It’s great news that Ogden’s have agreed to carry out fencing repairs to the perimeter of the reserve.

“Thanks to everyone who cared enough to sign the petition, and thanks to John Healey and Emma Hoddinott for their continued support.

“Hopefully once the perimeter is secure we can look to improve the actual reserve itself.”