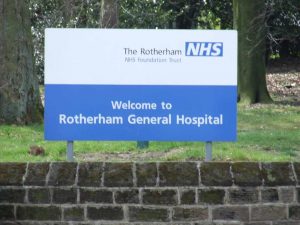 Last year Rotherham NHS Foundation Trust announced proposals to set up a subsidiary company meaning supporting roles, such as porters and cleaners, could have been outsourced with staff facing changes to their pay and conditions.

John helped organise meetings between hospital staff, union representatives and the Trust’s Chief Executive and Chair to outline their concerns with the plans.

John said: “I welcome the decision by Rotherham NHS Foundation trust to call a halt to the proposals, it is sound sense for our hospital services and staff who work there.

“The fact that hospitals are even having to consider such complicated schemes to save money shows how stretched NHS finances have become.”

Lynn Monk, Branch Secretary, UNISON Rotherham Health said: “The UNISON branch are very grateful for the support we received from John as well as the wider public of Rotherham in opposing the transfer of staff to the Wholly Owned Subsidiary.

“They realised that it would undermine the staff pay and pensions but importantly  could have resulted in the wholesale transfer of many more staff out of the NHS, privatisation by the back door.

“UNISON members stood firm against it,‎ bolstered by the support from John and his colleagues.”