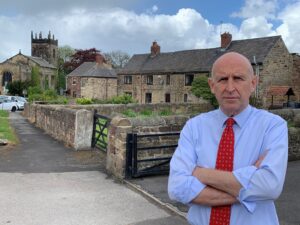 MP John Healey (Wentworth and Dearne) has commented on today’s Government announcement on rail plans for the North.

“This is a massive let-down for the North. While many will feel an immediate sense of relief and ‘good riddance’ on axing the HS2 Eastern leg, we’ll see little of the £10 billion saved in Rotherham and Barnsley when we badly need new train links, shorter journeys and better trains.

“HS2 could have been a big boost for South Yorkshire but Ministers killed the case when they changed the route in 2017. This meant all pain and no gain, with the high-speed line running through South Yorkshire without stopping.

“This breaks a big Boris Johnson pledge to level up rail funding in the North, when the Government are spending three times more per person in London than Yorkshire, and much of the money saved now will go to the Treasury not transport in the North.

“The ballooning costs of HS2 made its end inevitable, as Ministers lost control of the project. They’ve needlessly blighted the lives and homes of thousands of people who now deserve an apology from Ministers.” 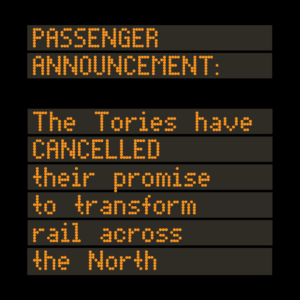 • HS2 was originally conceived and proposed by the last Labour government in 2009.
• HS2 Phase One is a high-speed rail line connecting London Euston to Birmingham.
• HS2 Phase Two includes an Eastern leg to Leeds from Birmingham, and a Western leg to Manchester from Birmingham.
• HS2’s entire route was given the original £56bn budget in 2015 but this has since doubled to £106bn according to the Oakervee Review published in February 2020.
• The NAO has also suggested that Phase One alone could cost upwards of £40bn – a 47% increase on the original budget.
• The long-delayed Phase 1 of HS2 was originally set to be completed by the end of 2026 but now it is expected that the route won’t open until at least 2029 and could even be as late as 2033 and full services from Euston starting even later between 2031 and 2036 – five years later than originally planned.
• Phase 1 has been delayed and overbudget with the Oakervee review blaming the procurement strategy and poor management by HS2 Ltd for the spiralling budget.
• Phase Two of HS2 is not expected to be completed until at least 2036 and could be as late as 2040 but the NAO has highlighted “significant uncertainty” around this date.
• Earlier this year, HS2 Chief Executive said that work on the Eastern Leg of HS2 had been halted as they await advice from Government.
• The Eastern leg M18 route was announced in July 2017 to go through Sheffield station rather than Meadowhall despite efforts from local MPs John Healey and Ed Miliband.

• Transport spending in London is over 3 times more per person than in the north of England according to Treasury figures from 2018-19 where £903 was spent per person compared to £276 in Yorkshire and The Humber and £486 in the North East. [5]
• Yorkshire and the Humber has the second lowest level of transport funding per person with just the East Midlands with a lower level (268 per person).