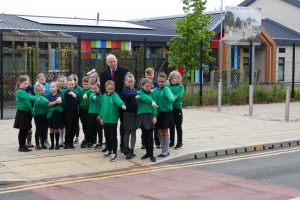 MP John Healey is backing school children in a bid to make the road safer outside Goldthorpe Primary.
John met school councillors who told him they didn’t feel safe crossing busy Doncaster Road and were worried about the speed of drivers.
Now the MP is setting up a meeting with Barnsley Council transport boss Paul Castle.
He said: “I – and the kids – want to make it safer for them to cross the road to get to and from school.
“When the school was built, they only put in a crossing area. But it’s not enough. I think the council should look again.”
A pupil was hit by a car in December and since the new school opened the lollipop lady has left and not been replaced.
The MP and the school want the council to consider a number of measures, including a zebra or pelican crossing, reduction in the speed limit, replacing the school crossing patrol, warning signs, speed bumps and speed cameras.
2019-05-28T13:37:02+01:0023rd May 2019|