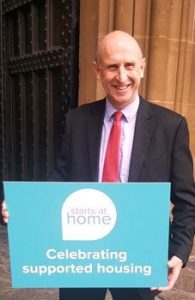 Labour will lead a debate on government funding changes which are set to close supported housing schemes.

John Healey, MP for Wentworth & Dearne and Shadow Secretary of State for Housing, secured the debate and will lead it today (Wednesday 25 October).

He said: “The government’s defeat on Universal Credit shows that Parliament is determined to hold this Conservative government to account for failing ideology and bad policy decisions.

“Labour will call on the Government to drop plans for crude cuts which will close vital supported housing for thousands of vulnerable people, including the homeless, elderly people with dementia, veterans and women fleeing domestic violence.

“We want to give MPs of all parties the chance to challenge Ministers to change course.”

Under Conservative plans, cuts to housing benefit coming into force in April 2019 will cap support for housing costs at a new lower level, which charities and other housing organisations say could lead to the closure of many supported housing schemes.

Even before the cuts have come in, 85 per cent of vital new supported housing developments have been cancelled or are on hold.

The north would fare worse than the south, because the cap is lower but providers’ costs are the same.

Mr Healey has worked closely with Tony Stacey, Chief Executive of South Yorkshire Housing Association (SYHA), who backs the debate and has called on ministers to rethink their plans.

The change would see SYHA lose more than £3m and result in the closure of the majority of its care and support services.

SYHA provides 1,000 homes for the homeless, elderly and people with learning disabilities and mental health problems.

Tony Stacey said: “The government needs to go back to the drawing board.

“The cap is irrational, unworkable and a potential disaster for vulnerable people reliant on supported housing.

“It would mean no purpose-built accommodation for people with mental health problems, putting them at greater risk of more acute episodes, re-admission and crisis intervention – shifting more pressure and cost onto the NHS and social care system.

“There would be a permanent loss to Rotherham of accommodation for homeless families.”