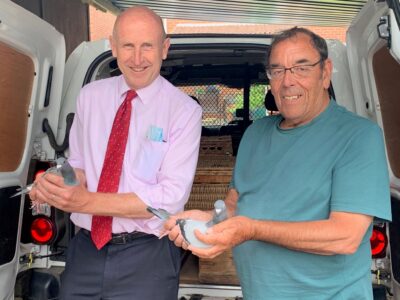 John is battling to overturn new Brexit rules that are stopping pigeon racing across the English Channel.

He has been contacted by a local pigeon fanciers who say new rules mean the sport – where birds are released in Europe to fly back to the UK – cannot take place. Such races have been running for more than 100 years.

The MP has written twice to the Environment Secretary, George Eustice – on 13 April and 3 June – but not yet had a reply.

He said: “Owners appreciate the need for stringent regulations for movement into the EU but these birds are low risk and are not being imported, only transported then released.

“This should have been resolved as part of the Brexit terms and now needs an agreement with the EU.

“I want to know what the Secretary of State is doing to try to fix this and I’ve urged him to take this up with his counterpart in France.”

Mr Healey is also in touch with the Royal Pigeon Racing Association, which is raising concerns with the Government and the French Minister of EU and Foreign Affairs.

New Animal Health Regulations due to come in on 21 April would have required pigeons to have a health certificate signed by a vet and be in the EU for 21 days before release.

In May, the EU agreed to extend the transitional period for the regulations until October 2021, but member states can apply their own national rules and France continues to require an animal health certificate.

UK owners want the requirements to be removed altogether.

Mick McGrevy (pictured with John), 73, has owned pigeons since he was 12. He currently has about 100 kept on land near his home in Goldthorpe Green, Goldthorpe.

He a former chairman and life vice-president of the National Flying Club, which was formed in 1898, has members nationwide and organises races from points in France and Spain during spring and summer.

The birds usually complete the 500-mile trip in just a few hours, returning home on the same day they are released.

Mick said: “We really want to see this sorted out so we can get back to the racing we enjoy and have been doing for decades.”

Read coverage of this story: