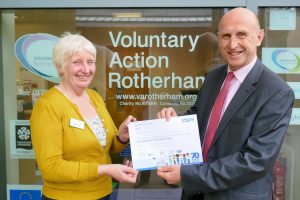 n Healey has nominated Voluntary Action Rotherham for a national award to mark the 70th birthday of the NHS.

The organisation, which supports and promotes the voluntary sector across the borough, has been recognised for its massive contribution working alongside the NHS in its Social Prescribing Scheme.

John said: “Everyone is rightly proud of the NHS and I’m proud of what this ground-breaking scheme is achieving in Rotherham. So I wanted to nominate Voluntary Action Rotherham (VAR) for the NHS70 Parliamentary Award for Excellence in Primary Care as a way of promoting this around the UK.”

“VAR’s Social Prescribing Service has helped over seven and a half thousand people with long term health problems to access community support since it started in 2012. There are some stand-out stories of how the service has changed people’s lives by linking them into everyday activities”

“This nomination is a way of thanking everyone that works at VAR for the work they do for Rotherham and the role they play in working with GPs. The competition for this award will be tough, as I’m told there are more than 700 entries but our Rotherham scheme really is an example of excellence. ”

Nominees initially put forward by MPs will be judged by senior local and Regional NHS experts to find regional champions in each category, which will be announced on 21 May.

The regional champions will then be judged by a high level panel with the overall winners being announced at a special ceremony in Parliament on 4 July – the day before the NHS’s 70th birthday.

Further information on the Parliamentary Awards is available at www.nhs70awards.co.uk