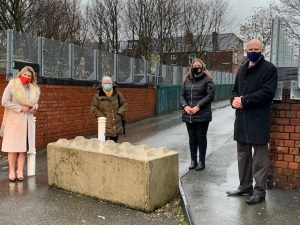 A bridge that connects Goldthorpe village is set to reopen after being shut for almost two years.

Straight Lane bridge is expected to open in early February after MP John Healey chaired meetings between Barnsley Council and Network Rail. This secured Network Rail’s agreement to carry out a new strength test and help fund reinforcement work if it was needed.

The bridge was closed because of safety fears but it has caused inconvenience and extra travel time for people in Goldthorpe, who have been forced to use an alternative route through a traffic bottleneck in the village centre.

The reopening is a result of pressure from local councillors and Mr Healey who brought the council and rail authority together and got them to agree on an action plan.

John said: “This is good news at last for Goldthorpe. Residents have had to put up with the bridge being out of action for too long.

“Barnsley Council took the decision to close it because they couldn’t be sure the bridge was safe and the old weight restrictions were right.

“From day one, residents wanted the bridge reopened. It’s taken longer because of Covid but I want to thank senior officers from Barnsley Council and Network Rail for working together to sort out the problems. I also pay tribute to Councillors May Noble and Charlotte Johnson, and community campaigner Dorothy Coates, who have been listening to residents and taking their concerns up with council officers.”

Network Rail have carried out technical tests but concluded no strengthening work was needed. It will reopen with a higher weight limit.