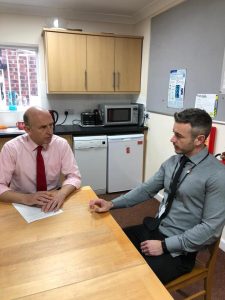 It follows months of pressure following the November 2019 floods from the Mayor, Sheffield City Region, council leaders and MPs.

It includes £80m of new Government investment alongside other public and private funding.

Previously Ministers had only pledged £16m for South Yorkshire, and said it had to be spent on two schemes in Sheffield.

It means preparatory work can continue on essential schemes in our area, like those at Kilnhurst and Parkgate.

However there remains a £125m funding gap to pay for the South Yorkshire schemes in full.

John said: “The funding to protect Kilnhurst was in place in 2009/10 but the new Government came in and made big budget cuts.

“This week we’ve been holding our breath to see what damage Storm Christoph would bring.

“I was in Kilnhurst yesterday talking to residents and thankfully they’re safe and their homes stayed dry.

“But they’re always fearful that another devastating flood is just round the corner.

“Now we need Ministers to plug the funding gap so we can get to work on all the flood defence projects necessary in Rotherham and across South Yorkshire.”

John wrote to the Prime Minister – making the case for flood defences in South Yorkshire – in February and August last year.

He also took part in the South Yorkshire flooding summit in October 2020 when he brought the plight of Kilnhurst school to the attention of the Secretary of State, and got him to agree that previously flooded areas should have priority.