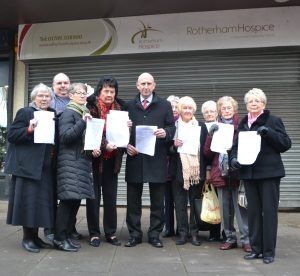 HOSPICE volunteers have launched a petition after a charity shop in Wath was shut without warning.

They were told on 29 November that the Rotherham Hospice furniture shop on Montgomery Square would close the next day – leaving stock stuck inside and confusion about how customers who had already placed orders should collect their purchases.

Irene Hartley MBE helped found the shop in 2009 and has volunteered regularly since.

She said she thought Rotherham Hospice believed the shop was not making enough money. After the closure, three volunteers received a letter saying the shop was ‘struggling to compete in its current location’.

But she added: “We’ve been given no proper explanation. Who would close a shop just before Christmas?

“If the shop was struggling they should have asked us for ideas for ways it could take more money – not just close it without notice. We’ve been asking for a unit to store more furniture so we don’t have to turn things away, and for us to have access to the van more often.”

John Healey MP said: “Support for the Hospice runs deep in Wath, which is why so many people like the shop in the centre of the village and want to see it continue. I hope the trustees recognise the huge commitment the shop volunteers gladly give to the Hospice, and will think again.”

So far nearly 200 people have signed the petition, which is available to sign in the MP’s office at 79 High Street, Wath.