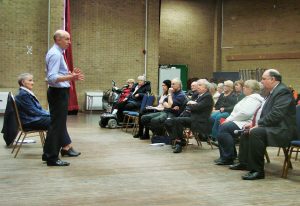 More than 1,100 people have signed a petition to keep Wath’s banks open.

MP John Healey started the petition two weeks ago, as soon as HSBC and Yorkshire Bank announced plans to shut branches in the village. If they close, Wath would be left without a bank.

Mr Healey also spoke at a public meeting at Montgomery Hall in Wath on Friday aimed at giving residents and businesses the chance to air their views.

The MP has requested meetings with bank bosses and will take concerns back to them.

He said: “I’m pulling together all the concerns that have been raised with me by residents and businesses to put together the strongest possible case and challenge the banks to rethink their decision to close their branches in Wath.

“It is unthinkable that Wath could be left without a bank.

“Wath is a proud village and a strong community. Hundreds of people have spoken up and said they don’t want the banks to close.

“I’m worried about how this would hit local businesses and people who can’t bank online, and I simply don’t think the Post Office can offer an adequate alternative.”