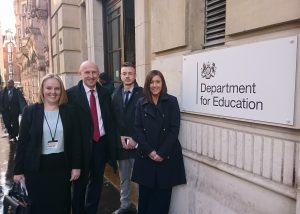 The Schools Minister has pledged the decision on Rotherham’s bid to become a national trailblazer for schools mental health is “imminent”.

During a meeting in London on Monday (19th November) with three local head teachers and John Healey MP, the Minister Nick Gibb heard the group argue Rotherham’s case and confirmed that a verdict on plans to bring £1.6 million to the borough through NHS England was close to being announced.

John Healey had pressed for the summit so the Minister could hear directly from head teachers about the need for greater Government support to help schools deal with the mounting mental health concerns they have to handle on a daily basis. It followed the MP’s recent mental health survey of local schools.

John Healey said: “It was good to get the Minister’s ear and our Rotherham heads really took him to task on the mental health crisis in our schools.

“He listened carefully as the heads talked about the complexity of problems faced by pupils, the need for a counsellor in every secondary school and for similar access to counsellors in primary schools.

“I also pressed hard for a decision on Rotherham’s trailblazer bid and told him there’s no better place to pilot the Government’s plans for education mental health support teams. We left feeling hopeful but still with our fingers crossed. It’s clear the Minister shares our concerns about mental health support in schools but the Government has to step up its action, which is too slow and too small-scale.”

Rawmarsh Community School’s Helen O’Brien was one of the three local head teachers that attended the meeting, she says: “This was a great opportunity to discuss such an important issue at the top level of government.

Ryan Cousins, head teacher at Kilnhurst Primary, also attended the meeting. He said: “We were able to tell the minister about the urgent need for help that young people with mental health concerns require.

“The services that we work with are brilliant, but they’re under pressure, which results in longer waiting times and it was vital to tell those in power about the real life experiences we encounter.”