Local apprenticeships have almost halved since 2015 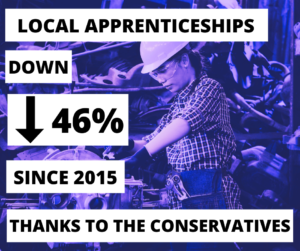 John Healey has called on the government to do more when it comes to creating apprenticeships across Rotherham and Barnsley.

He’s urging the government to adopt Labour’s plan to create 12,970 new apprenticeships for young people in Yorkshire and the Humber this National Apprenticeship Week.

It’s as latest figures show the government has overseen a decline in apprenticeship starts with 46% fewer people taking up an apprenticeship in Rotherham and Barnsley since 2015.

National Apprenticeships Week recognises the enormous contribution made by apprentices and their employers in Rotherham and Barnsley, giving people the chance to earn as they learn and delivering the skills our country needs to prosper. However, under the Conservatives these training opportunities have been disappearing especially for young people.

To reverse this downward trend and secure the skills our country needs for the future, Labour has called on the government to introduce a wage subsidy which could have created 12,970 new apprenticeships across Yorkshire and Humber this year. This subsidy would be funded from underspent funding in the apprenticeships levy – a charge large employers have to pay to government.

John said: “I’m pleased to back National Apprenticeship Week, recognising the enormous contribution made by apprentices to our economy and wider society. There’s no better way to learn than on the job and apprenticeships are available in every sector.

“But it’s clear to see the Government is failing to create the opportunities young people and our local economy needs to prosper.

“The Conservatives have overseen a huge decline in apprenticeships with a reduction of almost half locally compared to the uptake in 2015. That’s why I am calling on the Government to adopt Labour’s wage subsidy policy to boost opportunities for young people to secure our economy post pandemic.”

Backed by the Association of Employers and Learning Providers (AELP), Labour’s plan could have created 100,000 new apprenticeships for 16-24-year olds across England this year.