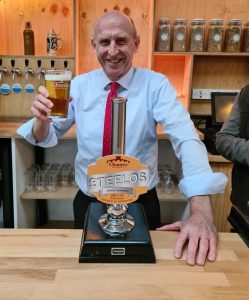 MP John Healey has urged the Government not to scrap a tax break for small breweries that he brought in.

He recently visited Chantry Brewery in Parkgate, who have warned they may be forced to close if plans go ahead to make smaller breweries pay more tax.

The Wentworth & Dearne MP brought in the small breweries relief (SBR) in 2002 when he was Economic Secretary to the Treasury.

John said: “The Government is bowing to big breweries with these changes. They’re giving money to big business by taking it away from small independents.

“Small breweries tax relief has been the single biggest support for new local breweries and we’ve seen huge innovation and growth since Labour introduced it almost 20 years ago.

“The Government needs to scrap cuts to SBR and support our small brewers.”

Mick Warburton, one of the owners of Chantry Brewery, said: “The SBR has enabled the three of us – two ex-steelworkers and one redundant banker – to invest and grow our brewery and create 20 new jobs, employing some people who were made redundant at the steelworks.

“It has enabled us to compete with global producers which dominate the marketplace and also give the consumer a choice.

“If the SBR is cut, as proposed, we will have to stop further planned investment and cut jobs. It may ultimately mean the closure of the brewery. We cannot compete with the global buying power of the major breweries.”

At the time the relief was brought in, John said it would “help the smallest breweries invest in their business and grow … [and] provide greater choice for beer drinkers.” He also wanted to help small companies compete with the big global brewers.

Currently brewers that produce up to 5,000 hectolitres (hl) a year – around 900,000 pints – get a 50 per cent reduction in the duty they pay. Above this there’s a sliding scale, up to the big global brewers who pay 100 per cent.

But the Government announced in July that they want to cut the threshold 50 per cent duty starts at to 2,100hl.

The consultation has been delayed leaving small businesses already hit by the coronavirus pandemic fearing for their future. Small breweries have seen their sales fall by 82 per cent during lockdown and have not received the same Government support as others in the hospitality sector.

The Society of Independent Brewers say small breweries employ 6,000 people and contribute £270m to GDP each year. Their petition against the changes has attracted 43,000 signatures.

John has written to the Exchequer Secretary to the Treasury, Kemi Badenoch MP, calling for the Government to abandon plans to lower the threshold for the relief.