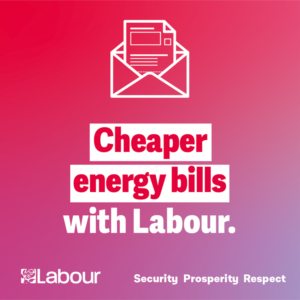 To help households with the current crisis, Labour has fully-funded plans that could reduce the looming price rise in April by around £200 for everyone, with targeted extra support for those struggling the most. Labour’s priority for extra help would mean working families, pensioners and the lowest earners, receiving up to £600 off their annual bills

Labour would cut VAT from energy bills and cap any Spring rises, paying for this with a one-off windfall tax on North Sea Oil and Gas producers who have profited from price rises.

John said: “We know the Treasury has VAT payments that are hugely swollen by higher prices, while big gas producers are also making bumper profits. People are really worried about winter energy bills and they’re feeling the pinch before the Government’s scheduled price rises in the Spring.

“We want to stop bills going up and that’s why Labour would give families security by taking fully-funded measures to save most households around £200 or more. These plans would provide help for everyone and give more help to those that are struggling the most. If the Government took this action, they’d have our full Labour support.”

Highlighting how crucial it is to keep energy bills lower in the longer-term, Labour have also said they would:

John added: “Help is needed now to help plan for the year ahead, but we know that this can’t just be a short-term fix.

“Labour’s plan to keep energy bills lower in future would see us accelerate home-grown renewables and new nuclear, retrofit 19 million homes to save households an average of £400 a year on their bills, and reform our broken energy system to stop energy companies playing fast and loose with the rules.

“It is entirely right that the energy producers which are benefitting from this crisis are asked to pay their fair share.”