John commissioned brand new figures from the independent House of Commons Library which reveal for the first time David Cameron’s housing legacy – showing that under the recently departed Prime Minister fewer homes were built each year on average than under any Prime Minister since Stanley Baldwin in 1923.

The figures underline what John describes as “six years of failure” on housing, as well as the scale of the challenge facing the new Housing Minister Gavin Barwell.

“These figures reveal the David Cameron’s legacy of six years of failure on housing.

“Alongside reforms on land, planning and investment, Labour’s answer to the country’s housing crisis is to make the strong progressive case for handing out more power to local communities and regions.

“It’s not just more democratic, it’s also that good government action can often fix and shape markets better at a local than a national level. And hope that politics can help with the pressures people are facing is the best antidote to the fear and uncertainty which was both the cause and consequence of the UK’s vote to leave the EU.

“With the Conservative failure on housing now fully expose, a Labour alternative is more important than ever.”

The full figures from the independent House of Commons Library are available below. 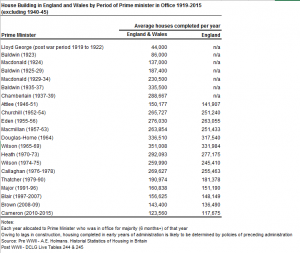