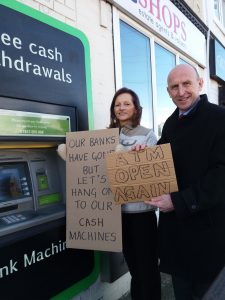 MP John Healey is supporting a campaign by local residents to keep a cash machine in Goldthorpe.

A cash machine at risk of being removed has been given a temporary reprieve while its use is monitored by owners Cardtronics.

Local resident Heather Bottomley, who started a petition to save the ATM at 16-18 High Street, said: “This machine used to break down so much that local people lost confidence in it. Then Cardtronics claimed it was not used enough and were set on taking it out.

“The petition told Cardronics the machine would be used if they would properly maintain it, which is what they have now agreed to do for a six-month trial.  It has been reliable since its re-opening.”

Heather now wants to spread the word that the ATM is working, and together with John is encouraging people to use the machine if they want it to stay.

John said: “Communities like Goldthorpe are still reeling from the banks closing, something that has hit older people and small businesses particularly hard.

2.7m people still rely on cash to make payments, with older people and those on a low income more likely to do so.

Consumer group Which? has said it is worried this could lead to mass closures of free-to-use ATM machines across the country.