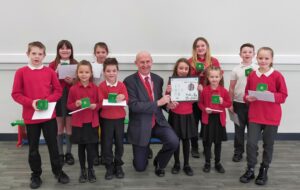 John Healey’s Christmas Card Competition has returned for 2021 after taking a break last year due to the Covid-19 pandemic.

The Wentworth and Dearne MP announced the winner at a special assembly at Kilnhurst Primary School.

The winner and 9 runners up, all aged between 6 and 10, were presented with gifts and a copy of the winning card for their family.

John said: “It was brilliant to be back at Kilnhurst Primary School and joining the teachers and children. It’s been a really tough year for them after they were flooded out and relocated to other local schools in Swinton.

“There were some fantastic entries from all of the classes and it was very hard to pick a winner. We’re really proud and pleased that Kyla has created such a beautiful picture for the front of this year’s card.”

Kilnhurst Primary Head Teacher, Ryan Cousins, said: “It’s the first Christmas back in our own school and this has kicked off the celebrations.

“All the children got involved and the entries were fantastic. I don’t know how John managed to pick a winner in the end, but he did, and Kyla was so proud of her entry. Everyone at the school is super impressed that it’s going to be used on the card.”

The winning design is of a rainbow-coloured bauble and has been designed by Y4 pupil Kyla Beatson.