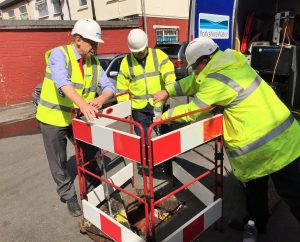 Dearne MP John Healey has backed Yorkshire Water’s ‘Be a binner’ campaign asking residents in its top 10 sewage blockage hotspots to bin wet wipes and sanitary items, not flush them.

The postcode area S63 is in Yorkshire Water’s top 10 hotspots and the MP was invited to meet some engineers who look after the sewers in the constituency during one of their proactive checks. The engineers were on the hunt for blockages caused by flushable wet wipes.

The company is calling on customers in South Yorkshire to stop flushing wipes down the toilet, pointing out that even so-called flushable wipes don’t break down in the sewer.

Sewer blockages can cause homes and gardens to flood, and even result in sewage entering local rivers and becks. Yorkshire Water is called out to more than 14,000 sewer blockages every year, costing £2 million.

After the visit, John said: “It was good to see first-hand the problems these wipes are causing and meet the engineers with the job of cleaning out blockages. I was struck by how big the problem has become in recent years and that wipes now cause of 70 per cent of blockages. Yorkshire Water say it costs them £2 million a year to deal with blocked sewers, which goes straight on our water bills.

“Part of the problem lies with those who make and sell wet wipes. They often brand the product as ‘flushable’, so it’s understandable that you’d think it’s OK to put it down the loo. But even wipes that say they’re flushable don’t break down like toilet paper and they block our sewers, which can worsen flooding and pollution and push up bills.

“Whatever it says on the wet wipe pack, it’s best to bin it, not flush it.”

To report a sewer blockage fast and for free, visit yorkshirewater.co.uk/callback to request a free call back or chat online.