Barriers installed at retail park after MP steps in 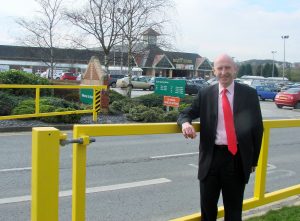 New barriers have been installed at a retail park after an MP intervened to stop nuisance ‘boy racers.’

Residents living near Cortonwood Retail Park near Brampton Bierlow reported nightly meetings of up to 50 cars, with revving engines, high-speed races and screeching tyres regularly keeping them awake until the early hours.

Police told the MP they received complaints almost daily and after trying a number of initiatives they felt the only way to put an end to the trouble would be to stop drivers getting in to the retail park.

John stepped in to put pressure on the land owners to take action.

He urged bosses or supermarket chain Morrisons to install barriers and Cortonwood managing agents Savills to ensure their gates were locked earlier and every night.

Now Morrisons have fitted new metal gates though they are not being used yet. Savills have said they are ensuring the barriers to the rest of the park are being locked every evening, now just 20 minutes after shops close, and a patrol car was being used by their security provider.

Police say they have seen a big drop in incidents being reported and residents say noise levels have improved significantly.

Mr Healey said: “This noisy, nuisance behaviour had gone on for long enough. Local residents should not have to put up with being disturbed when they’re just trying to get a good night’s sleep.

“After years of police asking them to fit gates, I’m pleased that Morrisons have now taken notice of our concerns and begun to take action.

“I will be keeping a close eye on the situation and ensuring they and Savills continue to play their part in keeping the peace at Cortonwood.”